What a lovely way to spend a soggy afternoon:  sketching in the lifeboat station.

Many thanks Lytham St Annes Lifeboat Station, St Annes for your hospitality.  I hope you enjoy our sketches which are below.

My last plug for RNLI... if you haven't visited this station do.  It has a viewing gallery, dressing up for children, interesting displays, lots of events coming up and a shop.  It also has a roof so perfect for a wet weather visit!

Posted by christine at 09:17 No comments:

Email ThisBlogThis!Share to TwitterShare to FacebookShare to Pinterest
Labels: sketchbooks

The task...
Using a limited pallet of four coloured pencils, depict an interior using an image as a starting point.

I love the simplicity and coherence a limited pallet brings to these drawings.  Notice Roland's drawing, I think most would agree it's easily recognisable as "Vincent's Bedroom at Arles"  Vincent van Gogh 1889.  Less well know is Stuart's starting point, "Card Players in a Sunlit Room" Pieter de Hooch 1658:  the idea of inside & outside is captured beautifully.

Well done everyone:  all the pieces work really well!

A silhouette is the image of a person, animal, object or scene represented as a solid shape of a single colour with its edges matching the outline of the subject.  The interior of a silhouette is featureless and the whole is usually presented on a light background.

Silhouette images were first used to describe pieces of cut paper, which were then stuck to a backing in a contrasting colour, and often framed.

Cutting portraits in profile from black card became popular in the mid-18th century, though the term silhouette was seldom used until the early decades of the 19th century:  this tradition has continued under this name into the 21st century.

Silhouettes represented a cheap but effective alternative to the portrait miniature.  Skilled specialist artists could cut a high-quality bust portrait, the most common style, in a matter of minutes, working purely by eye.  Other artists, especially from about 1790, drew an outline on paper, then painted it in, which could be equally quick.

The name comes from Étienne de Silhouette, a French finance minister who made austere economies in 1759 because of the Seven Year War.  His name became synonymous with anything done or made cheaply including silhouettes as we know them today.


Our task...
Draw the profile of the Queen onto coloured paper / card.
Make the image into a silhouette or something else. 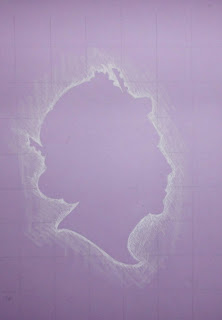 Example:
using a straight edge, a grid was drawn over an image of the Queen
another grid was made on paper
Marking where the Queen and grid intersected assisted in drawing a copy of the first image

Pencil, then white marker were used, then I added white coloured pencil.

The fab results are below...

In the afternoon Art Circle reconvened at the Water's Edge Cafe near St Annes Lifeboat Station where fab drawings were made of the station, the pier, the beach & the promenade.  Next time I'll make sure I move my camera from my morning bag into my afternoon bag!

If you join us in the afternoon, and you're very welcome, bring a chair.
Posted by christine at 01:12 No comments:

The task...
Bring the paper or pad you would use for making notes or lists.
Bring the pen or pencil you would normally use to make the notes/lists.
Draw the portraits provided cut from a daily newspaper.
Draw each other.

Simple - but not easy!

Without exception, everyone improved their observational skills:  the beautiful drawings are below.  Notice in some, the economy of line to give a soft rendition and notice in others the striking resemblance to the people drawn.  Excellent!