We looked at aspects of the art that decorates tombs and pyramids of ancient Egypt.

These, according to EH Gombrich in "The Story of Art" were based on knowledge.  The "artists" were artisans or highly skilled craftspeople who carefully followed traditional methods to depict people, stories and objects.
The familiar image of a person (image below), in this case Hesire from a wooden door in his tomb shows a profile of his head with the eye as we would see it looking from the front.  His shoulders and torso are also seen as viewed from the front yet the legs, feet arms and objects are shown in profile.  It's thought this was to enable all his body and possessions to be with him in the afterlife.  This style shouldn't be confused with lack of skill.

Ancient Egyptian Gardens were also depicted in the way their components were usually viewed which gives a strange combination of profile, frontal and bird's eye view points. 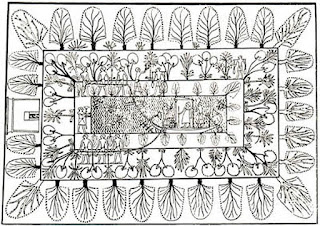 This was the starting point for our task.

Art Circle work is shown below.

Plants were grown for medicinal purposes as well as for decoration, perfume & wreaths for festivals & worship.  The garden was a place for; quiet and privacy; shade from the heat of the day; entertaining guests and family gatherings.

Adapted from women & the garden